Lord I Need You

I have had the song, “Lord, I Need You,” on my heart for the past couple weeks. Most of us will be familiar the song, but it is always refreshing to come back to the Lord and remember just how much we need Him. I invite you to sing this song with me, as I am sure many of us are going through an assortment of difficult situations these days. We need the Lord in every way, in everything, in every situation, in every hour and moment. Praise the Lord that He is the Author and Perfecter of our faith (Heb. 12:2) who will be faithful to hold on to us to the end (John 10:28), and to work and finish all that He started in us (1 Thes. 5:23-24).
May the Lord help us and teach us more to raise songs like this that acknowledge and confess our need to Him when we find ourselves in those temptations and difficult situations. May we have a further realization both of how much we need Him and how He is the bountiful supply and Fountain of Life for our every need. May we experience Him more and more, lean on Him more and more, and depend on Him more and more each and every day.
–Ian K

1.
Lord, I come, I confess,
Bowing here, You are my rest;
Without You I fall apart,
You’re the One that guards my heart.

2.
You alone have power to save,
Lord, all my sin, You take away;
So wash me now, in Your precious blood,
You’re the Way that I come to God.

Bridge
Teach my song to rise to You
When temptation comes my way,
And when I cannot stand I’ll fall on You,
Jesus, You’re my hope and stay.

Sin is the great equalizer. It makes us all the lowest of the low. We all have sinned and fallen short of the glory of God. No matter how hard we might try, we could never live up to God’s standard of righteousness. And that is what makes grace so amazing! Grace saves us, not out of our own merit or character, but simply because God could and he wanted to. Through the death and resurrection of Jesus, we all can experience new, eternal life! Not only does this save our souls from hell and grant us access into the Lord’s eternal home, but it also molds us and perfects us into Christ’s image here on earth. The apostle Paul talks about this experience of Grace in 1 Corinthians 15:10: “But by the grace of God I am what I am, and his grace toward me was not in vain. On the contrary, I worked harder than any of them, though it was not I, but the grace of God that is with me.”

In fact, the writer of this hymn, John Newton has a similar story of God’s grace slowly working in him over the course of his life. In his early twenties he became involved in the Atlantic slave trade and even commanded his own slave ship. His first interaction with God happened when he was 23 years old. He was out at sea and was caught in a terrible storm and nearly capsized and drowned. He cried out to God for mercy and for salvation. Even though that was the start of his spiritual journey, it still took many years for the grace of God to become evident in his life. He still remained in the slave trade until the mid-1750’s, but eventually decided to devote his life to God. He became an abolitionist, began studying Christian theology, was ordained in the Church of England in 1764, and penned over 280 hymns. One of these, of course, is perhaps the most famous Christian hymn of all time, “Amazing Grace,” which was first written on New Year’s Day in 1773.

May we each have an “amazing” story of grace in our lives, as the Lord brings us from the very pits of ruin, to a servant of God molded in His image, and finally into His very blessed and glorious presence, bright shining as the sun!

1.
Amazing Grace! How sweet the sound,
That saved a wretch like me!
I once was lost, but now am found;
Was blind, but now, I see.

2.
T’was Grace that taught my heart to fear,
And Grace, my fears relieved;
How precious did that grace appear
The hour I first believed!

3.
Through many dangers, toils and snares
We have already come;
T’was grace that brought us safe thus far
And grace will lead us home.

4.
The Lord has promised good to me,
His word my hope secures;
He will my shield and portion be
As long as life endures.

5.
When we’ve been there ten thousand years,
bright shining as the sun,
We’ve no less days to sing God’s praise
Than when we’ve first begun.

(For The Lord’s Table meeting)

Song: Manna, Manna Is All Around 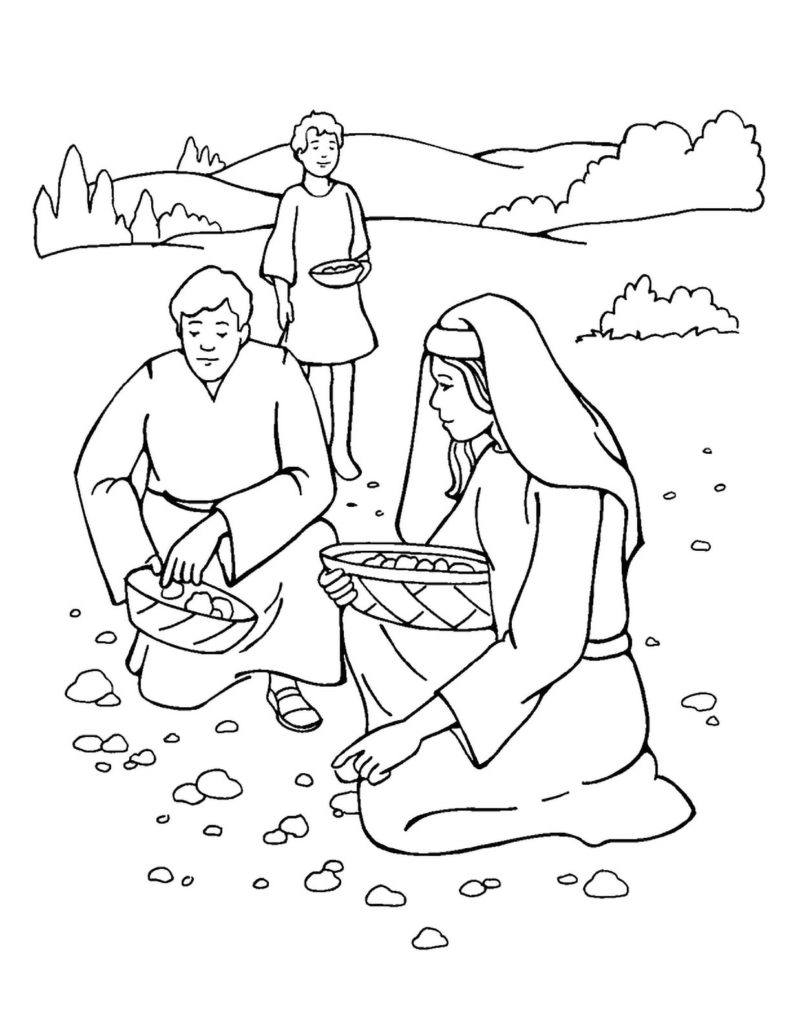 2And the whole congregation of the people of Israel grumbled against Moses and Aaron in the wilderness, 3and the people of Israel said to them, “Would that we had died by the hand of the Lord in the land of Egypt, when we sat by the meat pots and ate bread to the full, for you have brought us out into this wilderness to kill this whole assembly with hunger.”

4Then the Lord said to Moses, “Behold, I am about to rain bread from heaven for you, and the people shall go out and gather a day’s portion every day, that I may test them, whether they will walk in my law or not. 5On the sixth day, when they prepare what they bring in, it will be twice as much as they gather daily.” 6So Moses and Aaron said to all the people of Israel, “At evening you shall know that it was the Lord who brought you out of the land of Egypt, 7and in the morning you shall see the glory of the Lord, because he has heard your grumbling against the Lord. For what are we, that you grumble against us?” 8And Moses said, “When the Lord gives you in the evening meat to eat and in the morning bread to the full, because the Lord has heard your grumbling that you grumble against him—what are we? Your grumbling is not against us but against the Lord.”

13In the evening quail came up and covered the camp, and in the morning dew lay around the camp. 14And when the dew had gone up, there was on the face of the wilderness a fine, flake-like thing, fine as frost on the ground. 15When the people of Israel saw it, they said to one another, “What is it?” For they did not know what it was. And Moses said to them, “It is the bread that the Lord has given you to eat. 16This is what the Lord has commanded: ‘Gather of it, each one of you, as much as he can eat. You shall each take an omer, according to the number of the persons that each of you has in his tent.’ ” 17And the people of Israel did so. They gathered, some more, some less. 18But when they measured it with an omer, whoever gathered much had nothing left over, and whoever gathered little had no lack. Each of them gathered as much as he could eat. 19And Moses said to them, “Let no one leave any of it over till the morning.” 20But they did not listen to Moses. Some left part of it till the morning, and it bred worms and stank. And Moses was angry with them. 21Morning by morning they gathered it, each as much as he could eat; but when the sun grew hot, it melted.

22On the sixth day they gathered twice as much bread, two omers each. And when all the leaders of the congregation came and told Moses, 23he said to them, “This is what the Lord has commanded: ‘Tomorrow is a day of solemn rest, a holy Sabbath to the Lord; bake what you will bake and boil what you will boil, and all that is left over lay aside to be kept till the morning.’ ” 24So they laid it aside till the morning, as Moses commanded them, and it did not stink, and there were no worms in it. 25Moses said, “Eat it today, for today is a Sabbath to the Lord; today you will not find it in the field. 26Six days you shall gather it, but on the seventh day, which is a Sabbath, there will be none.”

31Now the house of Israel called its name manna. It was like coriander seed, white, and the taste of it was like wafers made with honey.

A message for your enjoyment throughout the week